Just to get that clear: it is not always raining in Seattle. We haven’t had rain in about two weeks (touch wood) and therefore, the trees still hold on to their colorful leaves. In between classes I am running around on campus trying to get some nice pictures. I also finally started exploring Seattle – until now I have seen more of Bainbridge Island and Chicago. Moreover, I have started to do some real “American” things like going to a football game (I don’t get it, why are people so crazy about it? To me it seems like a slow game..), going to the Cheesecake Factory (they have Oreo Cheesecake!) and actually thanking the bus driver when leaving the bus. But I have also been puzzled by some American customs. In one of my classes this guy starts eating in the middle of the class. And it is not a snack, but in the break he actually got himself a Caesar salad and as soon as the bell rang for the second half of the class, he started eating it. We are a class of about 22 people and he sat in the front row! And I am pretty sure that he hasn’t diabetes, because then a Caesar salad wouldn’t make any sense. Another thing is the price system. The prices displayed do not include the taxes – which is really annoying! And because I cannot actually calculate what I will have to pay and try to collect all the right coins (I am still confused about the coins, the 5 cents are actually bigger than the 10 cents coins) I started paying by card which is also very “American”. So you see, slowly I try to overcome all the small challenges in the American everyday life.
Next adventures ahead: Halloween, Thanksgiving and in December I am going to New York! I am super excited and have already booked a Holiday Lights-Tour through New York 😉

But for now I will leave you with some pictures of Seattle. 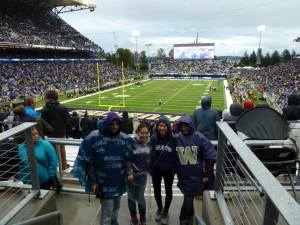 Alright, I admit it. It rained like hell that day! It was awful. We actually left after half-time because we were wet and frozen. I hope for another game so that I actually get to see a game until the end… 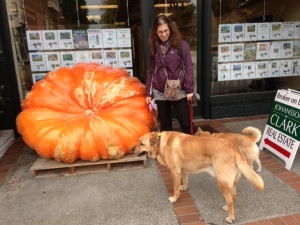 The biggest pumpkin in Washington state and it is on Bainbridge Island…the dogs weren’t really impressed. 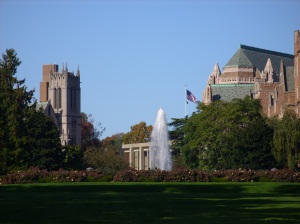 The beautiful University of Washington!

And here it is: autumn in Seattle 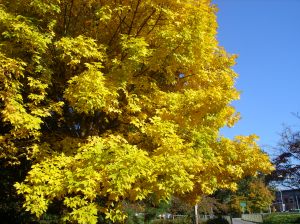 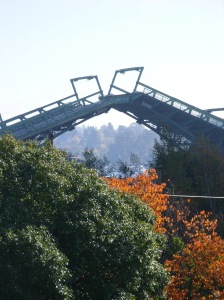 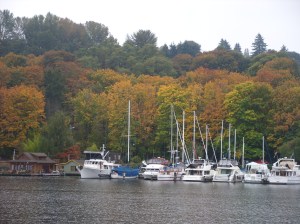 And finally my newest acquaintance: the Fremont troll

One thought on “Autumn in Seattle”

This site uses Akismet to reduce spam. Learn how your comment data is processed.